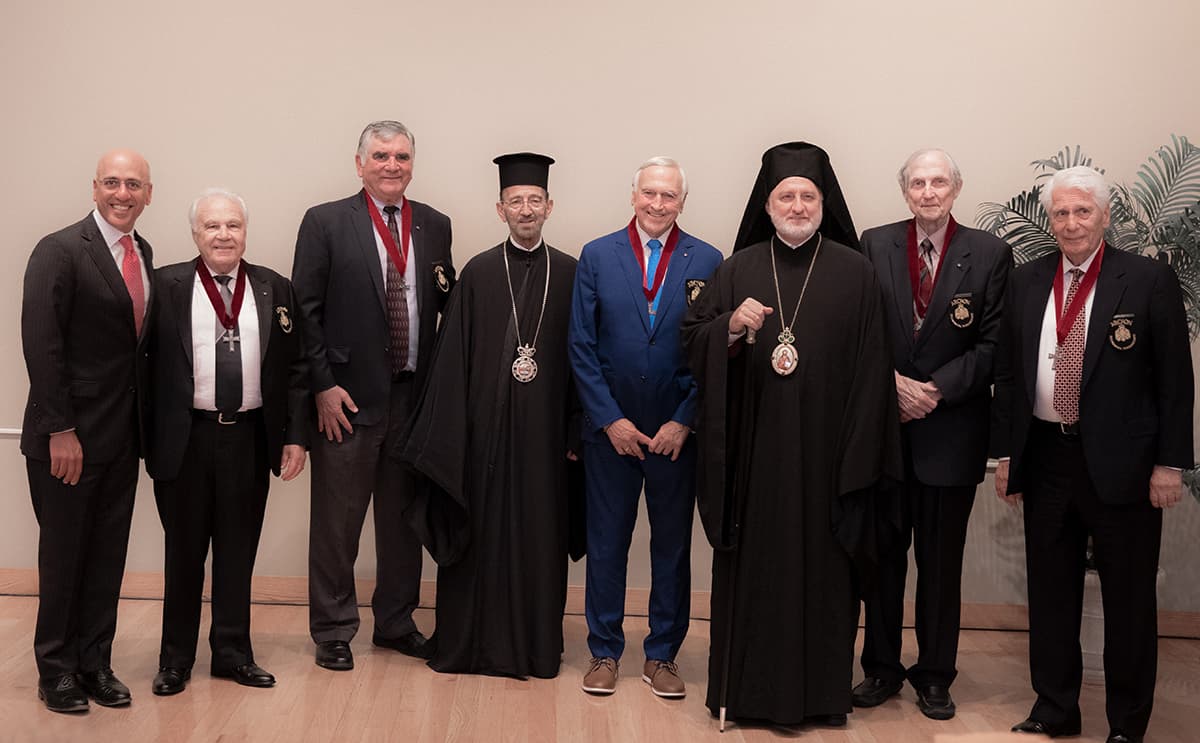 Pacific Northwest archons in the Greek Orthodox metropolis of San Francisco welcomed His Eminence Archbishop Elpidophoros of America on his first trip to the region, as well as His Eminence Metropolitan Gerasimos of San Francisco and His Grace the ‘Bishop Ioannis of Phocaea (Chancellor of the Metropolis), during a lunch Saturday, September 24, 2022. The hierarchs were visiting to help celebrate the 100th anniversary of St. Demetrios Church in Seattle, WA.

After a doxology at the Church of the Assumption in Seattle, lunch was held in that parish’s community center with regional clergy, parish council and leaders from Philoptochos, other guests, and archons from Seattle and Portland, as well as spouses.

Archbishop Elpidophoros offered the invocation, and the three Archons of Seattle, Clifford Argue, Paul Plumis, and John T. John, welcomed everyone, made introductions, and provided a brief explanation of “What is an archon?”

After a delicious lunch of Pacific Northwest salmon, His Eminence Metropolitan Gerasimos, addressing the Archbishop, said that the Archons of the Pacific Northwest “are all devoted stewards of the church who have offered themselves in so many ways, and are ardent defenders of the faith and supporters”. of the Mother Church. We just prayed the doxology and indeed we are grateful to God for this opportunity to be together and to have Greek Orthodox worshipers from all over the greater Seattle area – and beyond – to be here and show our love and respect to Your Eminence on your first Archpastoral Visit to the Pacific Northwest. There is no greater power than our common prayer as we have done today, praising the Lord with one heart and one voice.

Archon John T. John noted that training young men to become priests at the Holy Cross School of Theology in Brookline, MA is critically important to the future of the Greek Orthodox Church in America. Prof. A. Homer Demopulos, of blessed memory, was the senior proistamenos of St. Demetrios for 25 years, a quarter of the parish’s existence. Upon his untimely death in 1993, his family established the “Rev. Pr. A. Homer and Presvytera Artemis Demopulos Scholarship Fund” to support third- and fourth-year students who are committed to being ordained upon graduation. To help this worthy cause, the Archons of the Pacific Northwest along with several other friends of St. Demetrios contributed a special gift presented to the Archbishop in the form of a check for $17,000 to be applied to the scholarship fund Demopulos at Holy Cross.

After thanking the Archons for arranging the scholarship, Bishop Elpidophoros said, “Whenever I find myself in the company of the Order of St. Andrew, our beloved and deeply cherished body of Archons of the Ecumenical Patriarchate here in America, I feel tremendous pride and great happiness.

His Eminence continued, “You Archons, however, voluntarily take up the cross of the Martyric Church of Constantinople, and you walk the path following the Lord Himself in the wake of our spiritual father of all, His All Holiness the Ecumenical Patriarch Bartholomew.

For this, then, and for so much more, I express to you all my deepest gratitude. For someone born in Constantinople – like me – it is indeed very gratifying to see your devotion and dedication as Archons of the Throne here in Seattle, even though you are almost halfway across the world from Queen of Cities. Nevertheless, you seamlessly connect and transcend this vast geographic distance through your unyielding pursuits and unwavering efforts on behalf of Mother Church.

And so, in an expression of thanks, love and appreciation, I would like to raise my glass to you this afternoon. May you always prosper in your lives and be blessed in your families and loved ones.

Lunch was generously provided by Archon Pacific Northwest Regional Commander Isidoros and Maria Garifalakis. Special thanks also go to the Proistamenos of the Church of the Assumption and Vicar of the Metropolitan North West, Fr. Dean Kouldukis, the parish council of the Assumption and Philoptochos, and the Ginos family.